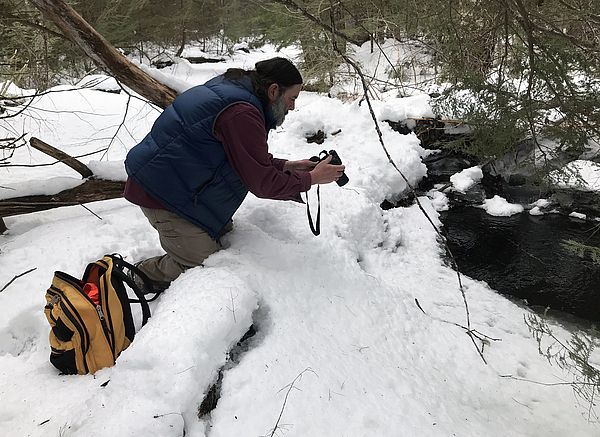 It’s a crisp winter morning. Jeff Littleton of Moosewood Ecological and Rick Brackett of the Conservancy are loaded down with backpacks, cameras, and clipboards, ready to venture into the woods to identify as many mammal tracks as they can. Not even 10 feet from where they begin, they see the first set of tracks in the snow.

Jeff and Rick have been out to the Devan Preserve in Marlborough multiple times, typically for five to six hours each outing. Their tracking is part of a two-year, rigorous scientific project to inventory which mammals are living on and benefiting from the protected habitat. So, what animal left the tracks? The two experts quickly agree: bobcat.

“Every time we go out there’s bobcat. I’m definitely seeing more bobcat sign these days,” Jeff says. “We’ve seen some pretty sizeable creatures out there. We saw a pair, which is always encouraging. They’re probably mating.”

The Devan Preserve, in the shadow of Mount Monadnock near Meetinghouse Pond in Marlborough, encompasses 523 acres. Mountain Brook flows through the property and feeds several wetlands, around which are lowland spruce-fir forest, uncommon for this corner of the state, and hemlock-pine forest. The diversity of habitats and proximity to other conservation areas make the preserve a mecca for wildlife.

“So it doesn’t surprise me that there’s everything you’d expect to find, but it’s still so exciting when you actually see the track,” Jeff says.

They won’t complete an exhaustive inventory — that would be too time and labor intensive, not to mention expensive. Yet the investment Jeff and Rick are making will provide a solid baseline from which to make plans for the next 10 to 20 years. “When you gather site-specific data, it helps you better manage a property according to its biodiversity,” Jeff says.

Rick agrees. “This snapshot of what’s here will help us make decisions to improve or enhance habitat conditions in ways that are most helpful for wildlife.”